Since ending school work last week, the bulk of my desk time has been spent doing After Earth related tasks. And look, the website went live when I wasn’t looking. Beyond the trailer, it begins to dole out information on the characters and their world, much drawn from the film and some drawn from material Peter David, Mike Friedman, and I generated. What I find most refreshing is that there is a tab that opens up a sidebar that allows you to see the tie-in material currently available, from the Dynamite one-shot to the digital short stories. That’s a rare acknowledgement of the licensed prose and thrills me no end. Take a peek and let me know what you think.Speaking of the short Ghost Stories from Random House, it turns out the original monthly schedule has been accelerated so all six are being rolled out with biweekly precision. Coming on New Year’s Day is my first, Peace. Here are the covers and official blurbs for the remaining five. For just under $6 you can get a real taste for the universe well before the prequel novel or the film itself. Not a bad investment.On a distant planet called Nova Prime, the United Ranger Corps defends the galaxy’s remaining humans from an alien race known as the Skrel and their genetically engineered predators, the Ursa. But when one Ranger discovers the secret to destroying the enemy, she faces a decision no one should have to make. “Ghost Stories: Birthright” is the third of six eBook short stories that lead up to the events of After Earth, the epic science fiction adventure film directed by M. Night Shyamalan and starring Jaden Smith and Will Smith.

Peace by me, available January 1Kevin Diaz’s parents raised him as a pacifist—hence their outrage upon learning their son is joining the Ranger ranks. But Kevin believes that peace is worth fighting for. And fight he must, to withstand a surprise onslaught of Ursa. As Prime Commander Cypher Raige launches a counteroffensive, Kevin arrives in time to watch both comrades and civilians cut down in a nightmare of blood and terror. Suddenly, he understands that being a Ranger, even the best Ranger, isn’t enough against an enemy that can disappear at will, strike with lightning speed, and tear a man in half with one swipe. Kevin took an oath to preserve humanity, but to do so, he’ll have to blaze a path few others have. 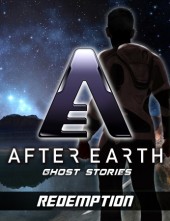 Birthright by Peter David, available January 14After watching her husband die in a horrible accident, Mallory McGuiness has only one option: Keep working. Rangers have duties. Responsibilities. Mallory is just that—an ordinary Ranger—until she vanquishes one of the nearly invincible Ursa and realizes she is much, much more. Unfortunately, the power to save the human race from extinction comes riddled with questions, conflicts, and no guarantees, only impossible choices. Frustrated by her suddenly tame assignments, Mallory considers jumping the chain of command, taking her grievance directly to Commanding General Cypher Raige. But she stifles the impulse long enough to tangle with destiny on a desert mission where nothing’s supposed to go wrong . . . and everything does.

Redemption by me, available January 28Anderson Kincaid was only seven when one of the monstrous killing machines known as the Ursa tore off his arm. It would have killed him, too, had a Ranger not sacrificed her own life to save his. Ever since, Anderson has wanted to be a Ranger. After years of relentless training with an artificial limb, his hopes are crushed the day Cypher Raige himself comes knocking—to explain the Corps’ strict rule against accepting applicants with prosthetics. His dream denied, Anderson joins the Civilian Defense Corps, only to find himself once again face-to-face with an Ursa. No savior in sight, he must rely on himself—and a power he never knew he had—to survive.

Savior by Michael Jan Friedman, available February 11Ranger Jon Blackburn wakes up from voluntary brain surgery, dazed and confused. He is a hero . . . or at least he will be one, if the delicate operation to remove his sense of fear was successful. Blackburn consented to take part in the experimental initiative to increase the Rangers’ reserve of “Ghosts,” soldiers whose lack of fear renders them invisible to the deadly Ursa. All indications are that it’s a spectacular success—but Blackburn doesn’t feel special; he doesn’t feel honored when Cypher Raige, the Original Ghost, personally thanks him. In fact, he doesn’t really feel much of anything. Doctors say that his fear is gone, but something else is missing, too; something Blackburn may not be able to get back, unless he can piece together this twisted jigsaw puzzle and find a way to become whole again.Atonement by Michael Jan Friedman, available February 25Black market divas do not generally swell the ranks of Ranger recruits, and Kat Bellamy is no exception. In fact, Kat’s looking at serious jail time—until she lands a few good ones on the flesh-eating Ursa that busts in during her arrest. Kat’s audacious behavior earns her a get-out-of-jail-free card from Commanding General Cypher Raige, with one stipulation: that she join the Rangers instead. Soon Kat’s a cadet, but while the physical challenges pose no problem, teamwork skills don’t come easily to a loner who trusts no one—especially when small gains are dwarfed by crushing defeats. Torn by doubt and tempted to give up, Kat presses on . . . unaware that the answer’s out there, just an arm’s length from the next Ursa.

One thought on “After Earth Digital Short Story Schedule”