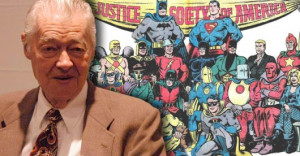 I wish I could recall the first time I met Murphy Anderson. I’m fairly certain it was some time back in the 1970s but I do know I crossed paths with him during my brief 1980 summer tour of duty. He was unassuming, with a deep voice, and always in a suit.He left us yesterday at 89 and the outpouring of affection from all corners of the Internet is a testament to his beloved nature. He was not a flashy artist, didn’t make readers salivate like a Joe Kubert or Neal Adams, but he could always be relied on to deliver a solid job.I was easily aware of his work given his strong, distinct style while reading in the 1960s. If anything, he may be the first inker I could tell just from his line. Later, I realized he was a penciler and inker and was even more impressed with his versatility. His clean, slick line was perfect for so many of Julie Schwartz’s series, tempering the artistic eccentricities of Carmine Infantino and Gil Kane while enhancing so many others. His Doctor Fate helmet was my preferred version, his work on Infantino’s Detective covers were perfect and boy, could he draw a good looking woman. 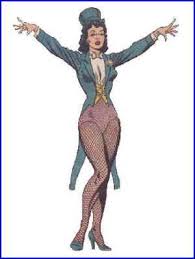 When I met him, he had largely put away his brushes and focused more on Murphy Anderson Visual Designs, taking a slightly different approach to color separations. He was the company we used when the 70% tone was introduced for our higher end books, printed on Baxter or Mando paper throughout the 1980s. He also did all the typesetting for our letter columns so when I received my own books to edit, I could talk to him about fonts and widths and help make my pages distinctive. 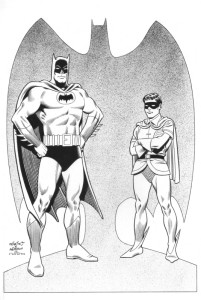 When Who’s Who was being prepared, Len Wein and I asked Murphy to once more pick up his tools and draw for us. After all, who but Murphy should handle the Atomic Knights, his signature sci-fi series? He surprised us with the glee he took at the notion and then insisted to us he would handle as many Golden Age characters as we wanted to give him. He was particularly insistent on getting first dibs on any Quality character, notably those originally illustrated by Lou Fine, his idol.Given his regular visits to DC, I got to spend time with Murph, hearing stories of the olden days, working at the offices given the steady need for his correction services. How he’d briefly handled the Buck Rogers comic strip and his enduring love of science fiction. In later years, he was always being asked about being there to buy Action Comics #1 when it came out in April 1938 but his appreciation of the genre and art form was much more than that.I was privileged to work with Murph beyond Who’s Who, having him ink Curt Swan on MASK covers. Seeing him ink Swan on Superman for Action Comics Weekly was also a delight although that wasn’t my doing but tickled the kid who grew up on the excellent “Swanderson” run of Superman.I enjoyed chatting with Murph and Helen at conventions or DC staff events. They were both class acts and now he’s gone, another great artist and another piece of my childhood a cherished memory.

One thought on “Saying Goodbye to Murphy Anderson”