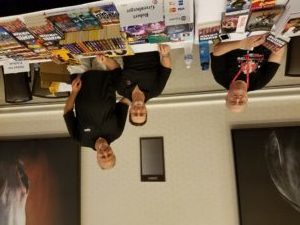 I have fallen out of the blogging habit, something I mean to correct starting here.Shore Leave 38 is now a fond memory and as usual, I had a wonderful, albeit tiring, time. The show remains a fixture in the Hunt Valley Inn and it has become a gathering spot for my fellow author, many of whom I now see only once or twice a year. Of course, I want to sit and talk, share a drink and some facetime, but the schedule keeps me hopping and it’s a problem of my own making.This year, we had to move the show closer, Mystery Trekkie Theater, to opening Sunday’s programming so Peter David could fly Monday to San Diego. That upended some of the usual routine but we managed. This year, my nephew Forrest, in town for courses at George Washington University, came for Saturday, sampling my world.

Friday started off earlier than usual, allowing me to have a nice catch-up lunch with Terry Erdman and Paula Block, two lovely people enjoying semi-retirement. I’ve known Terry since his publicist days, dating back to my Starlog work in the early 1980s. In fact, he arranged for me to visit the set of Buckaroo Banzai, my first film set and the first meeting with author Lee Goldberg. Paula I knew through fan circles before she joined Paramount Licensing and we spent several years working together on the Star Trek comics and my novels.The rest of the day was an opportunity to visit with writers in various settings, actually getting to dine with some before the Meet the Pros party. Crazy 8 Press debuted Altered States but none of my new work was in print as yet which was a shame. I still signed and sold books so that was nice.

Saturday I played emcee in addition to running from panel to panel, which was interesting. It did, mean, though, I at least had a chance to say hello to all the media guests. This year’s spotlight guest had to have been Karen Gillan of Doctor Who and Guardians of the Galaxy fame. After saying hello, she asked if I would be moderating her appearance, which not something normally done at Shore Leave. She asked if I would, to help screen questions. Suddenly, I am skipping one panel to share the stage with her and she couldn’t have kinder or a better guest. I warmed up the corwd asking Karen a variety of questions about her work and then let the audience have their say.

A highlight was moderating the Star Trek at 50 panel with Paula, Howard Weinstein, Dave Galanter, Christopher L. Bennett, and Larry NemecekI judged the Masquerade with Dark Matter’s Anthony Lemke and Peter David, which was all sorts of fun.

On Sunday, MTT kicked off with Dating Game of Thrones where I played Joffrey with Peter as Robert Baratheon and Mike Friedman as Hodor. We had tremendous fun and it went over well as did our skewering – at last – of “Spock’s Brain”. After one panel, I actually had the rest of the day to sit at the C8 table, chatting with fans and spreading the gospel.I did more emcee work, allowing me to finally meet and expressing my admiration of John Noble, who was incredibly gracious. On stage he was funny and engaging.All in all this was a fun weekend and although there were some people I merely waved at, could at least say I had more time with peers than normal which to me was a win.