Thoughts on Star Trek Beyond

James T. Kirk has never been focused on family. In the Prime Universe, he had a dead brother and sister-in-law and a surviving nephew but other than one episode, we never heard about them again. When Carol Marcus was pregnant, they agreed, he’d stay away and honored that until circumstances brought them together.In the Kelvin Universe, Kirk is haunted by his father’s memory. His recklessness, as seen in the 2009 reboot, is a result of his father not being a presence in his life. George Kirk (Chris Hemsworth) died in a confrontation with Nero and the Narada. We watch Christopher Pike coax Jim Kirk to join Starfleet to honor his father’s memory and Kirk accepted the challenge and quickly rose to captain. During the first feature film in the Kelvin Universe (or Bad Robot reboot), Kirk bested his father’s 12 minute captaincy and as Star Trek Beyond opens, he has outlived his father by a year.

The memory weighs heavily on Kirk (Chris Pine) and in an early scene with McCoy (Karl Urban), he wonders what comes next. McCoy probes and asks Kirk what he wants. The question hangs over the first third of the new film as the lengthy Captain’s Log is not filled with the awe and wonder of the cosmos but the tediousness contained within his five year mission, barely half over. We later learn, this has been lingering on his mind for enough time he actually applied to for a Vice-Admiralty, leaving the Enterprise for a posting on the space station for a posting on the space station Yorktown. 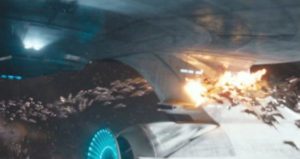 Then things happen. Simon Pegg and Doug Jung have done a wonderful job adding in depth and character after the logic-flawed Star Trek Into Darkness, allowing the triumvirate of Kirk, Spock (Zachary Quinto), and McCoy to interact and explore their own futures. While director Justin Lin shines the spotlight on the reset of the ensemble, these three get the meatiest parts which honors Gene Roddenberry’s original series.The entirety of the Star Trek franchise is well-served by this story with Easter eggs galore for the diehard fans without losing the more casual viewer. Instead, the screenwriters and directors take us into new territory seeing things we’ve never seen before. The drone bees that attack and then destroy the Enterprise is a clever attack and the comment the ship’s shields were not designed for such an attack shows that even in the 23rd century, Starfleet architects have things to learn.

Less clever, though, is Krall (Idris Elba), the protagonist that ironically ends up feeling the weakest part of the story. His motivations are ill-formed and while his backstory and history are nice nods to Enterprise the series, they are less interesting than an alien representing a race that challenges the very ideals the Federation was founded on. He is more a stock opponent and weakness what is otherwise a very strong film.

I would have liked to know about the other races lured to Krall’s planet, including the one that brought Jaylah (Sofia Boutella) to be there. She’s lost her family and has taken up residence in the hulk of the U.S.S. Franklin a starship from the earliest days of Starfleet.

The sense of legacy pervading the film is a strong theme and I wanted to see more of that. Kirk mourns his father and the appearance of Commodore Paris (Shohreh Aghdashloo) hints at the famed lineage culminating in Voyager’s Tom Paris. But the scene between her and Kirk is leaden and doesn’t go far enough to explore character or advance the plot. When Kirk tells Picard in Generations — “Let me tell you something. Don’t. Don’t let them promote you. Don’t let them transfer you, don’t let them do anything that takes you off the bridge of that ship, because while you’re there, you can make a difference.” – we understand Kirk’s commitment to being a captain. Paris should be the one passing that on to Kirk, reminding him of his first, best destiny.Similarly, Kirk looks more wistful than pained when his starship goes down in flames. The Prime Kirk would have been in agony at that stage of his career. That said, it went well and it’ll be interesting what’s new on its replacement.Lin brings a visual verve to the production so we see the starship zipping through warp space or shot from fresh angles so we were dazzled. He had lovely touches such as the glowing universal translator pips on Kalara (Lydia Wilson). On the other hand, given the loss of gravity in several scenes and the frenetic action, his editing left me dizzy and occasionally uncertain of what was happening. 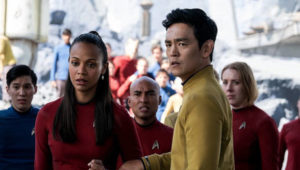 While Scotty (Pegg) has some wonderful moments, the rest of the crew needed more. John Cho’s Sulu has a husband and daughter but it would have been nice to see him talk about them or take charge of the crew while they were prisoners of Krall (and why were they being detained?). Chekov (Anton Yelchin) uses his innate genius to handle some of the tech demands but otherwise fawns after Kirk’s instinctual genius. I did like seeing Uhura (Zoe Saldana) in action and showing initiative, but had little else to say. Her romance with Spock is on the rocks which is under-explored.It’s not perfect with too much motorcycle, the choice of rock songs, and no explanation of where Carol Marcus went among the nits to pick.Overall, this is a strong Star Trek film and an excellent 50th anniversary production. It is certainly the strongest of the three Bad Robot films, make of that what you will, but the leads have grown into their roles and we’re finally given a chance to see who they are. The death of Leonard Nimoy’s Spock is nicely handled and the end title memorials to Nimoy and Yelchin are nicely done.