It’s hard to believe it’s time for Shore Leave 39 already. I’ve been coming steadily since SL 3 back in the early 1980s and I delight at how it has grown but retained its intimate, fan-centric experience.I’ve got a rather packed schedule along with playing emcee most of the weekend. For those attending, here’s where you can find me. Given my lighter Sunday schedule, you can find me at the Crazy 8 Press table.Friday 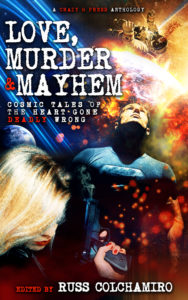 Meet the Pros, 10 p.m. – MidnightA chance to sign and sell books, take selfies, and chill. I’ll have copies of my Veil Knights novel making its debut. Crazy 8 Press will also debut Love, Murder & Mayhem. SaturdayBob, 10-11 a.m., Hunt/ValleyA chance to update everyone on whatever is going on in my life and of course, movie trailers, co-hosted with Glenn Hauman. All Kinds of Writing Workshop, 12-1 p.m., ConciergeHoward Weinstein (M), Kelly Meding, Bob Jones, Dave Galanter, Robert GreenbergerI’ll be there for the first half of this two-hour workshop designed to aid writers still working on their craft. 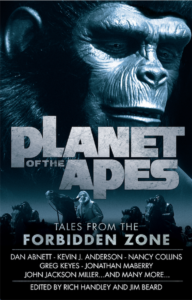 Planet of the Apes, 1-2 p.m., Salon ADayton Ward (M), Greg Cox, Robert Greenberger, Hildy Silverman, Kathleen DavidWith a new movie opening, the franchise approaching its 50th anniversary, and new books and comics coming out, what is it about those damn, dirty apes that keeps us coming back? And what lies ahead?

Crazy 8 Press, 3-4 p.m., DerbyMichael Jan Friedman (M), Robert Greenberger, Glenn Hauman, Aaron Rosenberg, Russ Colchamiro, Peter DavidSix years ago at Shore Leave, a group of writers decided to write what they wanted and publish it themselves. What have they learned since? What’s coming next? And why must Glenn Hauman die? Crazy 8 Press Teen Workshop – Plotting, 4-5 p.m., DerbyMichael Jan Friedman, Robert Greenberger, Aaron RosenbergDesigned for younger writers, we take you through the process, beginning with what goes into a good plot.

The Batman, 5-6 p.m., Salon AJohn Coffren (M), Robert Greenberger, Keith R.A. DeCandido, Derek Attico, Richard C. White, Mike FriedmanWhat is it about this 78-year-old character that continues to be embraced by fans of all ages? Join us as we delve into the mythos and the man behind the cowl. SundayBob & Howie Show, 10-11 a.m., Hunt/ValleyOnce a schedule filler, now a beloved evergreen on the programming grid as Howard Weinstein bicker, banter, and bluster about whatever occurs to us. 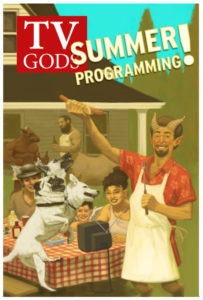